Anyone who has met me knows that I love a good competition.  When my college friends and I went out to karaoke, we turned it into American Idol and voted each other out (I did actually win one time.)  I encouraged a good friend to turn her birthday party into a pie-eating contest (of which I am the reigning champion.)  So when I first found out that the sales leaderboard actually lowers performance, I was in total disbelief (much like you are now.)

If you’re like I used to be (and 72% of the reps who came to our webinar with SalesHacker) you probably believe the exact opposite: sales leaderboards create competition, which brings out the best in us.  It turns out that this is just a story that we tell ourselves.  Once you overcome the anecdotal evidence, you will find that science shows us that sales leaderboards can significantly lower performance across all levels of your team.

Social Comparisons and the Sales Leaderboard

The fundamental premise of the leaderboard is rooted in Social Comparison Theory.  Social comparison theory examines who we compare ourselves to, and the effect of that comparison.  Comparisons are important in shaping our motivation, self-image, and performance.

Most people believe leaderboards drives the assimilation effect, that top performers inspire us to be better.  Anecdotally, we can all think of a time when we did something better just to beat someone else (in my case, I learned to eat pie faster.)  The problem is our anecdotes are at odds with over six decades of research on social comparison.  It turns out humans are pre-wired for the contrast effect, and that the assimilation effect requires a lot of intervention.  Because of our disposition towards contrast, sales leaderboards make most people less motivated and perform worse.

Double-Digit Sales Increase When the Leaderboard is Off

Wharton management professor, Iwan Barankay, produced one of the highest-quality studies of sales performance and it taught us that we have a lot to learn about rank incentives.  Barankay studied employee motivation and performance at an office furniture company with 1,700 reps over the course of three years.  His study consisted of a randomized control group, who saw their sales leaderboard as usual, and two treatment groups who were either a.) privately informed sales reps of their performance rank, or b.) provided performance benchmarks for being in the top 10%, 25%, or 50%.  The employees’ compensation was based strictly on performance; rankings didn’t play a role in their financial benefits at all.

These were also people who liked their leaderboards.  In an interview about his ground-breaking leaderboard research, Baranky discusses being contacted by high, medium, and low performing reps saying “You know, I used to see my ranking and now I no longer do. And this really motivated me in the past.”   When he went back to look at the data of the reps who asked for their leaderboard back, and they actually sold more after they stopped receiving their ranking.  Ultimately, Barankay found on average employee performance increased by 11% without sales leaderboards.  And most strikingly, results improved for all reps, including the highest performers.

What should we do instead of leaderboards?

DO: Focus on Individual Performance

An interesting find in Baranky’s study is that you can effectively diffuse the negative effect of the sales leaderboard by providing targets and benchmarks that help a rep improve their performance.  Other research has also shown that focusing on your individual target versus relative ranking on a leaderboard, improves your ability to translate your goals into concrete next steps, and thereby increase your likelihood of achieving your target.

We do this at Varicent Concert through our Slack app that gives Sales reps real-time commission tracking, so they see how they are doing against their goals in the apps that they already use.

If your team is hypercompetitive, you can still introduce elements of competition without having the harmful effect of the leaderboard.  Here are 3 tips to create more motivating competitions.

Limit any competitions to 2-3 people. There are numerous studies that show the larger the group you are compared to, the worse you perform.

Group by skill level. Jillene Grover Seiver, Ph.D. conducted a study about how competition affects your brain, motivation, and productivity.  She found that professional archers scored higher in competitions with their rival present than those without their rival.  The effect of the rival was so strong that the competition seems to matter less than the rival’s presence.

No financial incentives.  Create games where someone doesn’t have to lose in order for someone to win.  The company does best when both reps are performing well, so encourage doing well.  That means eliminating any financial incentives that only go to the winner.  Reward good performance equally, outside of the competition.

Turn. Off. The. Sales. Leaderboard.

Making this one change will literally cost you nothing (and it probably will save time!)  In return, you’ll see a sizable difference in your team’s motivation and performance.

From my own life, I see it in how I improved my pie-eating performance.  You lose when you look up at the field.  The way to win is to stay nose-down in your pie until it is gone.

Read our other four tips to increase motivation on your sales team.  You and your team will be more focused, happier, and more successful.

While you’re at it, try our goal visualization meditation to help your teams translate goals into specific actions.  Bonus- it also will increase focus, decrease stress, and avoid burnout!

And, book a demo with us today to improve your team’s motivation and performance with the only commission tracking software built on the science of performance.  (Leaderboards not included.) 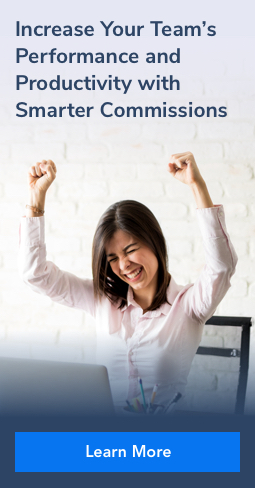